To celebrate International Women’s day, here at Oriel Partners, we have decided to dedicate a blog to a woman who we personally find hugely inspirational. The person we would like to acknowledge is Sheryl Sandberg, the Chief Operating Officer of Facebook, the world’s biggest social media platform. It isn’t just her business career that we admire her for but also the way she has coped with challenges in her personal life too.

Here are just a few interesting facts that make Sandberg standout and have made her the woman she is today. Whilst at high school and college Sandberg paid her way by being an Aerobics Teacher. Aerobics was extremely popular in the 80’s and Sandberg could often be seen in her leotard, leg warmers and sparkly headbands!

When Sandberg was just 26 years old she was asked to work in the United States Treasury Department which was usually unheard of for someone with her level of experience. She worked alongside Lawrence Summers playing an important part in the Treasury’s task to forgive debt in Asia during their economic crisis.

She met Mark Zuckerberg, the Founder of Facebook, at a Christmas party in 2007. Over the following months they discussed his vision for Facebook and how she could add value to the business. Sandberg quickly became his Chief Operating Officer and is still at the forefront of the business to this day.

In 2014, Sandberg, with the Girl Scouts, started a campaign to ban the word ‘bossy’. The word ‘bossy’ whether subconsciously or consciously used, is associated with women’s behaviour in a negative way and hindered women from achieving the top leadership positions within business. During this campaign Sandberg joined forces with celebrities including Beyoncé.

Sandberg is no supporter of Donald Trump, they met after he won the election in 2016 along with several other tech leaders including CEO of Amazon Jeff Bezos and CEO of Apple Tim Cook. She had strongly supported Hillary Clinton during the election and in 2017 she publicly slammed the President’s executive order on abortion rights.

Sandberg has been influential in all areas of business, not just the tech world. Often meeting with World Leaders to discuss worldwide strategies. With Facebook having more users than any single country’s population they have substantial power and influence which mustn’t be abused.

Interestingly enough Sandberg uses a Notebook for her To-Do-Lists. She refuses to use a digital device for keeping track of important events/details and says a Notebook helps her to organise her thoughts and once a page is complete she tears the page out!

In 1993, Sandberg got married, however, the marriage only lasted a year when her career started taking off. She didn’t let this get in her way and in fact years later wrote in her book “Lean In” how important the correct marriage is, stating that it is the “single most important career decision”. In 2004 she married her 2nd husband, Dave Goldberg, however, tragically after a treadmill fall causing head trauma, Dave passed away in 2015. Sandberg later wrote an inspirational post on Facebook which went viral describing her grief and struggles which has helped so many other people who have lived through a similar experience.

I’m happy to say that Sandberg has found love again and her Facebook status is ‘Engaged’.

HIRE THE PERFECT PA WITH OUR FREE HIRING GUIDE

If you’re looking to hire a personal assistant to help your business, ensure you hire the right candidate with our free hiring guide. 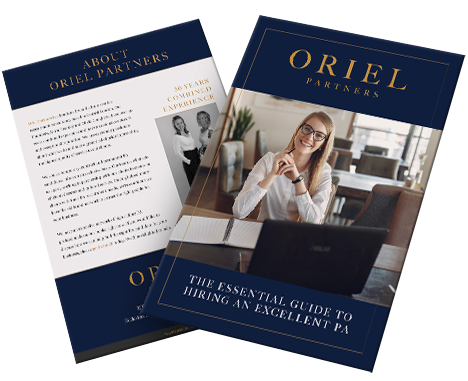 Get your free guide:

You will be receiving the guide via email. Please check your inbox.